At DINW, we take safety seriously. Many of our modalities and exams use radiation to take diagnostic images of our patients. But what is radiation, how is it used and what safety measures are in place to protect people from radiation exposure? Read below to understand more about the risks of radiation and how we prioritize your health and safety at DINW.

What is radiation and how is it used in medical imaging? 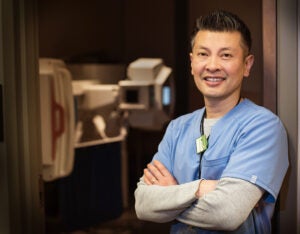 Radiation is the process of emitting energy from a source that travels through space as waves of energy. These energy waves can consist of a wide range of energy, known as a spectrum, with the amount of energy depending on the radiation source. In radiology, ultrasound waves, x-rays, and radio waves (MRI) are used to create internal pictures of the human body typically in a problem solving setting to identify the underlying reasons causing patient symptoms. Each form of radiation interacts with the body differently and interacts with each organ differently. For example, x-rays, used in radiography and CT, typically pass through air (lungs) freely, are somewhat absorbed by organs such as the liver, and nearly completely absorbed by bones. This allows for the creation of pictures of the internal organs of a patient.

Some imaging procedures use ionizing radiation to create images. Ionizing radiation, according to the World Health Organization, is radiation with enough energy to remove tightly bound electrons from the orbit of an atom which causes the atom to become charged or ionized. This is a very important as the ions can then interact with whatever they come into contact with such as our DNA. Why do we care? Damage can very rarely occur in our DNA that can increase our lifelong risk of cancer, typically developing 20 or more years following the radiation exposure.

X-rays, fluoroscopy, nuclear medicine, PET scans, CT scans and mammograms all use small amounts of ionizing radiation and are only used when the benefit of the exam outweighs the risk of the radiation. In addition, radiation can also be concentrated and targeted, allowing it to be used to treat some cancers.

What are the basics of radiation safety?

Radiation safety can be outlined in three principles – time, distance and shielding.

Radiation exposure is accumulated over the time of exposure, meaning the longer that someone is exposed to radiation, the higher the risk of experiencing radiation related effects.

Patients may be asked to wear a lead apron or other kinds of protective equipment during an imaging procedure to protect them from an unnecessary x-ray radiation.

What are the risks of radiation exposure from medical imaging?

Like all medical procedures, there are minimal risks involved in medical imaging, particularly with the modalities that use ionizing radiation including x-ray, fluoroscopy, CT and nuclear medicine (which includes PET). The risks are typically minimal, though a cost benefit comparison is always performed to ensure the benefit of the exam outweighs the potential risk of the radiation.

How does TRA keep you safe from radiation?

For more information about our commitment to Image Wisely, read more on our radiation safety webpage.

If you have any concerns about your medical imaging procedure, you should talk to your doctor or you can submit a question to one of our radiologists here.

October is Breast Cancer Awareness Month. If you are a woman over 40 years old,…